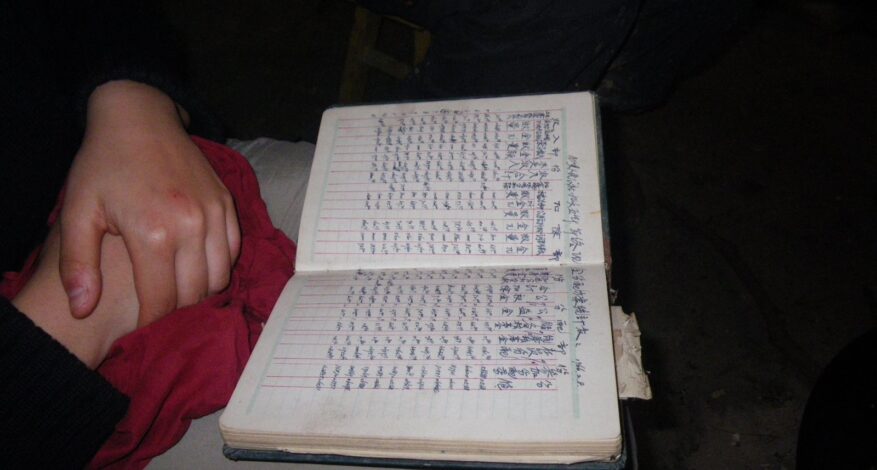 We carry on the topic of the agricultural history of Danian and its surroundings after having evoked, in episode 4, the years before 1949.

After the proclamation of the People’s Republic of China on 1 October 1949 and barely a year later, in June 1950, a law on land reform was published. But it was not until 1962 that it was implemented in the Danian region.

This law was based mainly on the disappearance of the private property rights of large landowners and a redistribution of land according to a classification of land and population.

Thus, rice fields were classified according to their yield; they were redistributed to landless peasants (from the land held by absentee owners and large owners (see episode 4) on the basis of 1000 m² per adult and 533 m² per child under 16 years old for rice fields. The dry land was divided between families. On the other hand, low-income farmers kept their land.

This has resulted in the creation of new rice fields in the valley bottoms (whose land used to be mainly owned by the big landowners) and the wooded areas were transferred to the village and maintained by the former domestic servants in return for wages and rice. Similarly, the animals (buffaloes, zebus) and farm equipment of seized former owners were redistributed to former farm workers.

The fate of the population was improving, and the peasants only paid a tax corresponding to 3% of the harvest. Especially in the Danian region, this allowed minorities such as the Miao and Dong to take over land held mainly before 1952 by the Hans.

Heading towards collectivisation “Semi-socialist” cooperatives were introduced by the Communist Party as early as 1955. They were collective structures, one per village, comprising work teams (usually 25 to 50 people). Private property no longer existed, and agricultural land was then owned by the cooperatives.

However, the peasants kept the animals, gardens and tools as a conservatory.

In each team an “accountant” was appointed who validated a certain number of points according to the work done. Irrigation work became collective, thus improving farming conditions, particularly for glutinous rice.

After 1957, Mao Zedong launched the “Great Leap Forward”, a set of reforms to accelerate industrial and agricultural production. Cooperatives were merged into “People’s Communes”. The Danian cooperative was created in 1958: all land and animals became the property of the People’s Commune.

The People’s Commune of Danian included 7 brigades and brought together about twenty villages (about 5000 people). The initial teams were transformed into working groups of 100-150 people who in turn formed “production brigades”.

Each People’s Commune had an office made up of:

• a brigade chief: deciding on the tasks to be carried out and participating in CP meetings

• a vice-chief of brigade: organising the work of the working groups and allocating tasks

• an accountant: distributing the work points, reporting the quantities harvested

The work was no longer paid, and meals were distributed free of charge in collective canteens. The buffaloes and zebus, owned by the People’s Commune, were raised by 2 people, and another person took care of the pigs in each work group.

In parallel with the installation of “mini-furnaces” to increase the production of steel, there was a strong deforestation of the region; thus, in Rongshui county it is estimated that 420 000 m3 of wood and 4 million bamboo stems were felled during this period.

The consequences of this organisation of work, coupled with climatic variations, were not as high as expected. In 1958, due to a dysfunction in the decision-making process, the harvests were partially lost, leading to significant malnutrition and deaths in the Danian region (this can be seen by looking at the dates indicated on the graves in the surrounding area). The reduction in labour forces had a direct impact on the animals, which gradually disappeared, and by ricochet on the fertilisation of the soil. However, family mutual aid and above all the arrangement of the rice fields at different altitudes (thus spreading out the work and harvesting period), which was still very much alive, made it possible to avoid a disaster that could have been even greater.

Our publications on glutinous rice are based on local Chinese and international data, a study carried out in 2009 by two agricultural engineering school students who spent several months in the field in Danian, as well as our personal observations in the Guizhou and Guangxi regions.