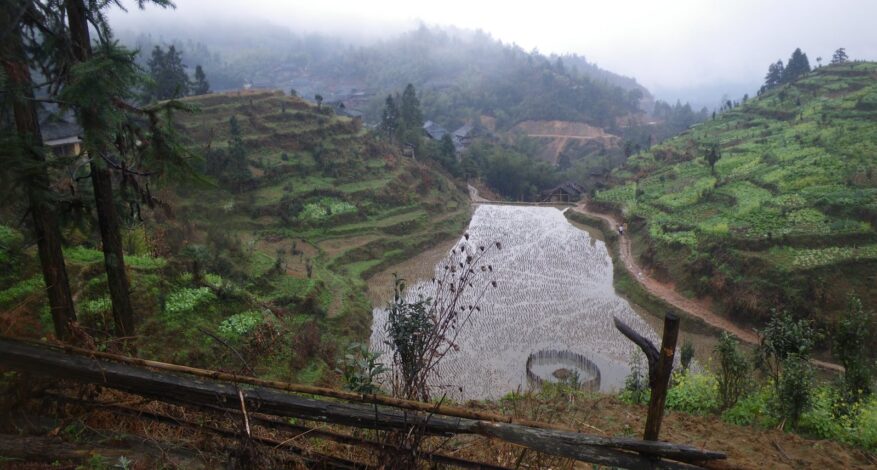 Before looking at the cultivation of glutinous rice, it is important to consider the geological and climatic particularities of the Danian region.

Geology
The region of Danian, at the extreme north-west of Guangxi province and on the border with Guizhou, is characterised mainly by sedimentary rocks (sandstone, shale, limestone) which, as a result of erosion and the thrust of the Himalayan chain, have formed numerous faults.

The relief is therefore mountainous, with an amplitude varying between 200 and 1000 metres above sea level (there are peaks at almost 2000 metres in the region if you go away from Danian).

The differences in the porosity of these rocks, and therefore in their underground water retention, have shaped the relief of the region with relatively gentle slopes rich in springs that are favourable for the creation of rice fields.

But this aspect also has drawbacks: the permeability of certain subsoils causes heavy runoff, which in heavy rains causes landslides and the sudden rise of water from streams and rivers.

The climate
The Danian region is under a humid subtropical climate with annual rainfall that can exceed 2000 millimetres (compared to Lyon: 825 mm/year). 3/4 of the rainfall is between April and August.

Temperatures, if they are quite high from spring to early autumn (average 28°C in July for example, with peaks of over 40°C), can be negative and present some frost at altitude and exceptionally a little snow.

The temperature gradient must obviously be taken into account according to the altitude and the exposure of the slopes and has a profound impact on cultivation techniques.

These climatic conditions mean that rice (even hybrid rice) is grown in one cycle, whereas in other regions there can be 2 to 3 rice growing cycles in a single year.

impact of crops on the soil
Clayey/schist soils are essentially acidic soils which are initially not very favourable for rice cultivation. The millennia-old work of farmers has made it possible to improve the soils, through water management, ploughing techniques, by modifying the chemical and microbial characteristics, etc.

In the next episode, we will focus on the vegetation cover of the region and the impact of man on it.